I got off the taxicab when we arrived at the hotel apartment when I heard a bang on the concrete. I suddenly dropped my camera. It was an excruciating moment that I had to pick it up and just hoped for the best. I didn’t even bear looking at the damage right away until we got to our room.

Having spent the night at Burjuman Arjaan by Rotana and happily taking photos of the place and the view from the balcony, I was satisfied with the overall performance of my Fujifilm X-E1 camera. So when this suddenly happened, I was hoping that the damage wasn’t that bad.

Upon arriving at our room, I laid my 18-55mm kit lens on the marbled kitchen counter and this was how it looked like. 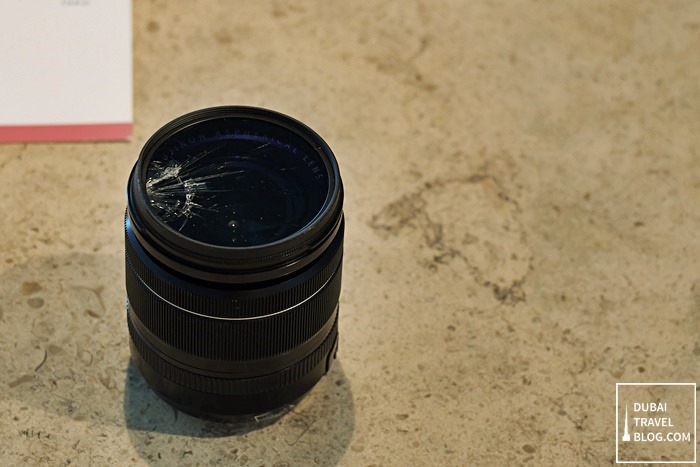 broken but not dead – I breathed a sigh of relief

I bought this camera for a good deal during a Gitex Shopper event and seeing this hot mess was more than I could swallow. In my head, I was already thinking how much I was going to pay to replace this thing. It’s not that easy especially when Fuji lenses are a bit pricey and I don’t even have a budget set for this in the first place!

What Happened
It was such a stupid decision on my part to just put my camera on my lap in the taxi when I could’ve strapped it around my neck – that’s what the strap is there for.

What Saved It: Benro Lens Filter
I had to examine it again and I realized that I attached a Benro lens filter on it and the tip of the lens filter was the part that directly hit the ground. I tried removing it but had a lot of difficulty due to a dent and it was stuck.

Grand Stores Digital in Burjuman
Upon checking out of the hotel apartment, we went straight to Burjuman mall and dropped by a “Grand Stores” kiosk (Grand Stores in Dubai are one of the few official distributors of Fujifilm cameras and lenses in the Middle East) and asked one of the staff if this could be fixed. They said that they would have to send it to their service center for their team to have a look at the device. But then, they could not guarantee if it was just the filter that was damaged unless they send it. It would cost me about 150 AED for the basic service.

Otherwise, I could check the device myself with whatever tools available at home. Thinking that I could just separate the filter out myself, I brought it home and attempted to take out the filter using a flat-blade screw driver. It took a few seconds but I managed to separate the filter from the lens. I found out that it was just the lens that got damaged! I breathed a sigh of relief as I didn’t have to get a new lens replacement.

Lesson Learned: Invest in a Lens Filter!
I’m very happy with my Fujifilm camera even if it took me some time to get used to its settings. I was even planning to get a wide-angle lens so I can get wider landscape photos of my travels. I thought I would have to delay it for some time because of this supposed mishap. Lesson Learned: Invest in a Lens Filter – better spend a few hundred Dirhams for it than buying a thousand Dirhams lens to replace it! 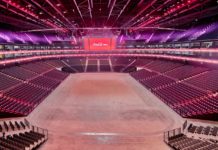 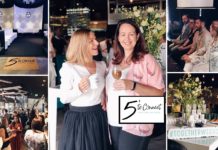 Legally Blogging in UAE: Discussion on NMC License by 5′ to Connect 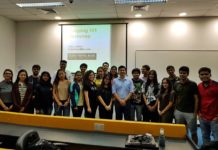 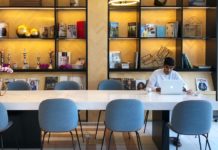 How to get the best out of Dubai